My significant other says I look like an udder disgrace!

The Horrors of Global Belching:

The world’s 1.5 billion cows and billions of other grazing animals emit dozens of polluting gases, including lots of methane. Two-thirds of all ammonia comes from cows. They emit a massive amount of methane through belching, with a lesser amount through flatulence.

(That word always sounds like a social disorder to me. It was first identified in Jolly Olde England in regards to Sir Lancelot, who was subsequently jokingly referred to as Sir Lancelittle.)

Belching politicians are a close second!

Statistics vary regarding how much methane the average dairy cow expels. Some experts say 100 liters a day (or about 26 to 53 gallons), while others say it’s up to 500 liters (about 132 gallons) a day. In any case, that’s a lot of gas, an amount produced by a car in a day and the average politician in a week.

(Multiple Sources and Some Stink!) 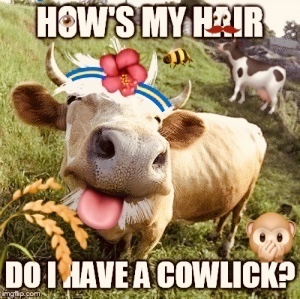 Cows in the grass mooing, belching, and otherwise passing gas! And to think they even have to silently suffer mutations, cow tippings and udder destruction!