A reply from Rethinking Scripture to my post, The Blogging Chaos Theory!

Oh my goodness!! Just a thought, I wonder what Freud would have said about your artwork!?

Well!? Surely Freud would never wear a Santa Suit!  Not even in his wildest, lucid dreams, you see!

In Freud’s view, my humor and artwork happens when my conscious is allowed the expression of thoughts that society usually suppresses or forbids. My superego allows my ego to generate my light and comforting type of humor, laced with biting and sarcastic crap.

But Freud’s humor theory, like most of his ideas, was based on a dynamic among id, ego, and super-ego. The commanding superego would impede the ego from seeking pleasure for the id, or to momentarily adapt itself to the demands of reality, a mature coping method. Moreover, Freud followed Herbert Spencer’s (as well of Kermit the Frog’s) ideas of energy being conserved, bottled up, and then released like so much steam venting to avoid an explosion. Freud was imagining psychic or emotional energy, and this idea is now thought of as “the relief theory of laughter.”

Freud was basically clueless and is otherwise forever dead!

But Kermit? He’s a wise frog who uses a park bench for his patients to recline on! 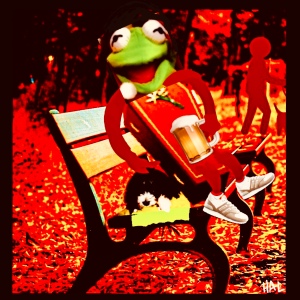 He knows it’s “Not Easy Being Green!”