The possibilities are endless: just look at Washoe and Me! 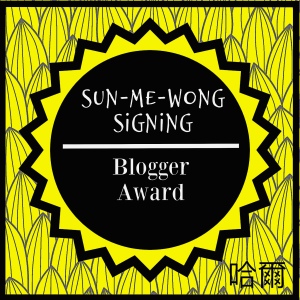 For the past two decades, humans have been teaching chimpanzees and other ape-like forms to express themselves using the sign language of the deaf.

During that same period, bloggers and other human-like forms have been increasingly learning to express themselves using the finger language of the mundane or clinically insane.

Just as the chimps are teaching each other sign language and using it to communicate among themselves, so us humans are doing similar.

“The most closely studied example of this involves a chimp named Loulis that at the age of 10 months was placed in the care of Washoe, an adult female that in 1966 became the first chimp to learn sign language.

Washoe, which understands and uses hundreds of sign language words, immediately took to Loulis and within eight days began teaching the young chimp simple signs, by demonstration and sometimes by molding the baby’s hands into the forms that represent words.”

Honorable mention to Herbie Su Aside, for his pitiful pioneering paranormal pastoral blogging study, A Finger on the Barnyard Post! Or Up Something Else!

For that reason I have nominated both Washoe and Boyce Rensberger for the Sun-Me-Wong Signing Blogger Award!

By the Way is Washoe Chinese!?